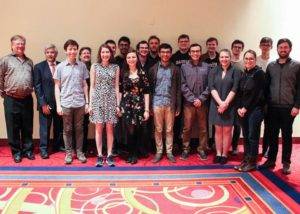 Founded in 1892, the Debate Council is one of the oldest and proudest intercollegiate policy debate programs in the nation. Committed toexcellence in both competitive and educational achievement, Harvard Debate has won the National Debate Tournament (NDT) seventimes, most recently in 2016, and finished second five times, since the tournament was first held in 1947. The NDT records show that Harvard Debate has been invited to attend the tournament every year since 1954 – a record of consistency unmatched by any other school. In recent years, Harvard Debaters have won every major national policy debate invitational. For two years in a row, in 2016 and 2017, Harvard won the Rex Copeland Award for the Top First Round At-Large Team at the NDT awarded to the team with the best individual record in the regular season.

Beyond these palpable achievements is a deeper contribution that the debate team makes to its members and to Harvard. Debating at Harvard is one of the most intellectually rigorous and rewarding experiences that the University can offer. Generations of debaters have honed their intellectual and rhetorical skills at Harvard, and have gone on to careers of success, service, and national and international prominence.

The challenge of public speaking builds sound judgment, self-confidence, and the capacity to make quick decisions under pressure. Having to debate both sides of a question develops mental agility and the ability to analyze the strengths and weaknesses of any position. Debating topics of national public policy demands thorough research, investigative acuity, and a broad base of understanding. Debating with a partner, guided by a coach, teaches adaptability and effective teamwork. All these skills stay with us our entire lives and make invaluable — even essential — contributions to our personal and professional successes.

In addition to regular tournament competition, Harvard Debate is committed to the promotion of debate as an important part of of our civic and political discourse. As such, Harvard participates in local events like the annual Beanpot Debates in Boston, held in conjunction with the Beanpot Hockey Tournament. On a more national scale, Harvard debaters have been asked to participate in a series of debates hosted by the Environmental Protection Agency on the efficacy of federal and state environmental regulations.